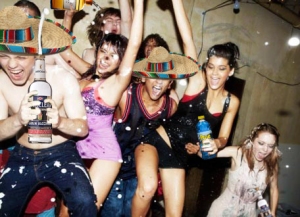 Today is Cinco de Mayo, another yearly chance for Americans to feign cultural involvement. As usual, they don sombreros, purchase in bulk from the magnanimous tamale fairy, and call their Salvadoran friends for advice on how best to celebrate a Mexican holiday that is observed exclusively by the United States. This year, however, there’s something missing; something crucial. Due to a rise in the destruction of agave plants by farmers who favor more lucrative, ethanol-producing corn, the United States has suffered an increasing shortage of tequila, the signature drink of Cinco de Mayo.

The shortage first caught media attention in 2007 when farmers experienced a surplus of agave that led to lower tequila prices. When they realized that corn was a more valuable crop, many farmers destroyed their agave plants and began to grow corn in its place. This crushing blow to collegiate alcoholism has paralyzed UCSB students with confusion, leaving them with nothing but cerveza to consume in massive quantities on the fifth of May.

“I like Pacifico and Dos Equis just fine, but I can’t drink them all day,” said second year Global Studies major Kathleen Spencer. “Do you know how many carbs are in beer? It’s just bread with alcohol, basically. I’d be soooo bloated.”

Spencer’s concern over her physical appearance is shared by an estimated 95% of the student body, based on Gaucho Marks reporters’ careful and persistent observation of the school’s most attractive students. While many will consume large quantities of Corona, Tecate, and other Mexican beers, the void left by tequila will be difficult to fill. Fortunately, some students, including fourth year Psychology major Pearce London, have found a doppelganger that is not only practical, but also embraces the cause of the shortage.

“I figured since all of the agave is being replaced by corn, ethanol production would skyrocket,” said London while filling his Home Depot shopping cart with as many cans of Klean-Strip denatured alcohol as it would carry. “This stuff is strong, cheap, and easy to find. It’s the most Mexican drink there is.”

London was not the first Gaucho to use ethanol as a means of channeling the spirit of Cinco de Mayo. CCS Literature super senior Matthew Williams has fueled his last four Cinco de Mayo’s with grain alcohol, having noticed the tequila shortage in the early stages of its proliferation.

“When my friends and I first tried partying with ethanol, we had to do a little bit of trial and error before we really got the hang of it,” said Williams as he sipped the 200 proof beverage from a red gasoline tank. “We played some Quarters with it just to pregame, and by one in the afternoon, two of my roommates were dead. That was the craziest Cinco de Mayo ever.”

Since that first fateful fifth of May, many students have made the switch from smooth, flavorful tequila to odorless, odious ethanol, leading to a rise in alcohol poisoning, blackouts, arrests, and regretful sexual encounters. Some have even begun to create their own ethanol based drinks, such as Patron-leum, Ba-corn-i, and Kernel-ua. Others, however, are adamantly opposed to the transition, such as third year Chicano Studies major Rigoberto Vargas, who has horded tequila since he first heard news of agave crops being destroyed.

“You gringos think it’s so cool now to drink grain alcohol. When I was growing up in Jalisco, I used to eat my cereal with ethanol every morning before I went to school,” said Vargas. “Tell your readers if–sorry, when they get sick of that stuff, they can talk to ol’ Rigo and get some of the finest blue agave tequila that’ll ever touch their lips. They’ll come crawling right back.”

“Literally,” added Vargas. “They probably won’t be able to walk.”