Tallism: Too High For Comfort 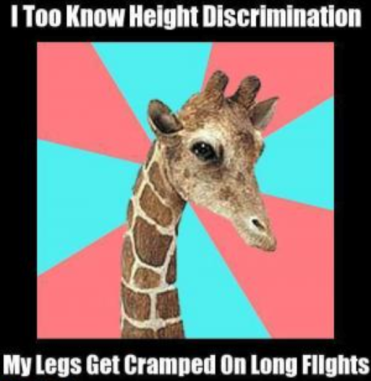 WASHINGTON D.C. – In September 2019, Jodie Kreyman, 16, was admitted into the D.C. Children’s Hospital seemingly out of the blue. Her pulse was normal, her eyes were seeing 20/20, and she was a rather attractive white girl. But alas, the doctors took her height and weight, and a look of horror spread across their face… they were completely normal. But Jodie insisted, cried, and Snapchatted her overpriced hospital expenses all across r/wellthatsucks until the hospital would listen to her demands.

“You don’t understand… I’m tall,” a reporter who was at the hospital heard in the whiniest of voices from across the room.

Dr. Raj Venkatramananjaninupojatrum, well-endowed surgeon supreme, appeared frazzled by the remark. For the first time within years of experience, something had evaded his thoughtful gaze. All physical tests seemed okay, so what was this crazy girl talking about?

“I knew immediately, she was a hypochondriac. We see cases like this all the time. It’s perfectly normal, and it’ll subside once she gets a healthy dose of reality and checks her privilege,” said the wise doctor.

CNN reporter Mark Hubert, not wanting to get left out of this story, reported, “You knew from Dr. Raj’s last name the man knew his stuff. Listening to his luscious voice was like being danced on by a magical fairy: enchanting.”

Then Jodie started going into spasms. Well at least that’s what she was saying as she calmly remained in the bed, as hospital staff would ironically attest. The standoff between the doctors and her lasted approximately four hours, until finally the doctors gave up. Jodie’s persistence in the face of real adversity had inspired them and a decision was made: Jodie had tallism.

In September, the CDC reported that people between the ages of 18-30 are developing a rare state of mind. It’s not a mental disorder, but they treat it with the same dramatic flair as one. Approximately 900 million people are currently “suffering” from the “disease,” with millions more being misdiagnosed with a similar strain of the disease: flexism. It’s a disease so invisible you can hear it, smell it, touch it, and taste it, but you can’t…see it. Oh wait, it’s because their heads are so tall that they can practically caress the heavens themselves! That’s right, tallism is the imbalance of neurons in the amygdala of the brain that causes Millennials and Zoomers to become neurotic about their height and suddenly gain a “woke” sense of oppression.

To delve deeper, reporter Lennie Wozniak went undercover at a local high school to find more information on this widespread disease. And what he discovered will shock you… but let’s be real, it probably won’t.

In one of his conversations, Lennie conversed with infected “fellow high school kid” Candace “Keepin’ it Real” Jones for her take on the situation.

“I feel it everywhere. People always come up to me saying, ‘You should play in the NBA… cuz’ you’re so tall.’ And I’m like, ‘you just don’t understand the struggle every day.’ You think I want to play in the NBA, way to be… racist? Sometimes, people ask me to help them grab stuff from the top shelf and I’m like, ‘bitch I ain’t got time for that!’ And they keep commenting about my height like it’s some superpower or something. But it’s not! Seriously, what do they expect a well-off, pretty, and TALL thing like me to do? It’s the worst. And let’s be real, an actual superpower would be something like being able to remain calm despite all of this injustice right here, because those are the real heroes!”

So Lennie dug deeper, but not after digging into his bank account first to fund yet another semester at this extremely prestigious private school. Turns out, the disease not only affects females, but also disproportionately affects males, as Lennie would find out when he was accidentally roped into joining the varsity football team. Captain Scott “Tall Man” Nikols had this to say, “Man, sometimes I’m tryna’ keep it too real. I try and post a picture on Snapchat, phishing for likes, if you catch my vibe, and instead of feeding my ego, people keep commenting, ‘damn you so tall bruh’ or ‘what’s the weather like up there in the clouds.’ What they don’t know is that I read philosophy, and perception, shit, it’s just a concept made up by our own mind. WE CANNOT REACH THE TRUTH LENNIE, WE CAN’T! (Scott violently shakes Lennie’s body, as well as his soul)”

However, Lennie, who once made James Charles drink his own tea instead of spilling it, discovered a way to the man’s heart, “Then, by that measure, isn’t your tallism also made up as a metafictional, verbal representation of your innate desire to attract attention, as the materialism that underlies this capitalistic world has driven you to pine for the approval of others, even at the expense of your own dignity. Why don’t you just admit you made tallism up? You just wanted to start something.” Lennie was beginning to see the benefits of the thesaurus he purchased a few weeks ago.

Lennie, of course, was referring to the #TallLivesMatter movement that was trending across Twitter, Facebook, and Snapchat. But Scott knew, as long as his head kept shaking, and his voice kept denouncing any scientific proof, no logical fact could defeat his pure, unadulterated ignorance. So he blew gently into Lennie’s earhole with the voice of a thousand suns, “I knew it Lennie, you’re a zombie. Brainwashed! Dwarfist…shit, I meant tallist. Well guess what? They tell you in school to ‘drink your milk’ it’ll help you grow. What they don’t say is then you’ll grow so tall you can practically take on the entire city of Japan in a modern day retelling of the classic Japanese kaiju flick Godzilla. They even call stupid decisions short-sighted, so I guess that means tall-sightedness is making hella smart decisions. But I never make smart decisions. Last night I drunkenly learned karate from an alley cat! Damn Lennie, you sound like a grown-ass adult that acts like they know what’s better, and only say that because their brain is more developed than mine.” What Scott failed to realize, despite the size XS clothes on a fully grown man, was that Lennie, in fact, was a FULL GROWN MAN.

Oh, but Lennie wasn’t done yet! Nope, if there was one thing everyone ought to know about Lennie Wozniak, was that he was a man dedicated to money. Money, he knew, would only come from the spiciest of stories, and the juiciest of gossip. So he went for the jugular, the sauce… the source. The one entity that manipulated this entire event: nothing. Indeed, one of the scariest things about this entire epidemic is that no one seems to know where this righteous indignation stems from. Is it the background cosmic radiation that people just assumed didn’t affect humans? Is it the consumerist world that Lennie was hinting at? Or perhaps, was it just the pre-ordained systemic notions of self-centeredness that ultimately drive these people to pursue things like clout, fame, and glory under the illusion of attaining happiness? Well, no one will know for sure, and perhaps it better stay that way.

To all our readers, this is a “serious” disease that should be taken seriously. Be on the alert to see if your adolescent or parasitic (wo)man-child has these symptoms of tallism: increasingly more self-aware realizations on their own height complex, a feeling of oppression rivaling the greatest actually oppressed people, and a stubbornness so powerful they manage to convince themselves a gift straight from the heavens is the end of the world: height supremacy.

The only cure at the moment is a simple slap to the face, and a complex multi-leveled roast that can only hope to ground them back to reality from their high egos.

EDIT 10/10/19: Lennie Wozniak is currently being awarded the Pulitzer Prize for Journalism for his work on this story, and for publishing his follow-up novel, Flexism: Return of the Gucciest Gang. He did not get paid for this article.