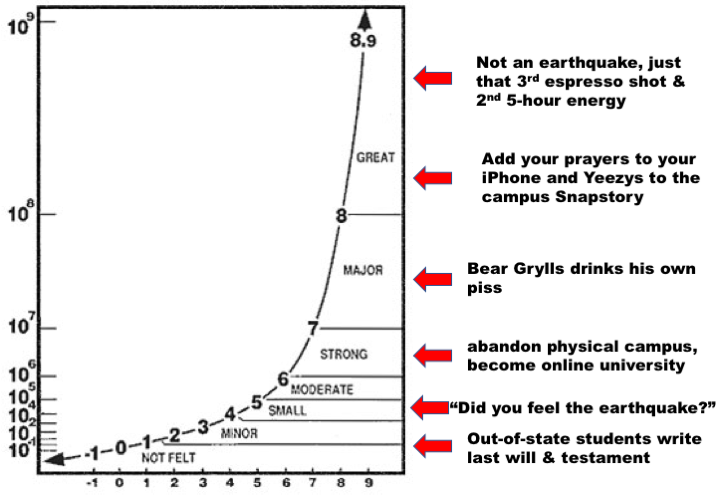 After the magnitude 5.3 earthquake felt in Isla Vista last Thursday, the university administration has decided to abandon its physical campus and restructure UCSB into an entirely online institution.

“Alright, that’s fucking it,” read an official email sent out by the administration shortly following the event. “Fuck this place. Let’s just all leave. We’re just gonna do that University-of-Phoenix-style shit from now on.”

The email went on to list both the dates by which students must be moved out of university accommodations and some suggestions for how to sneak your remaining stockpiles of liquor back into your childhood room at your parents’ house. It then offered instructions on how to re-enroll in UCSB’s new catalogue of courses offered online, most of which involve nursing or graphic design.

“Go home. Drink in your underwear,” it read. “You basically just have to take a Buzzfeed quiz about your major every week or so. There’s no lectures, no nothing. Be free.”

The earthquake that inspired the administration’s retreat comes on the heels of the wild fires and subsequent mudslides that affected Southern California a number of months ago. However, unlike those events, which actually resulted in verifiable things happening, the earthquake has not, in fact, caused a thing, or things, to happen.

Anticipating accusations that the move to renounce the physical campus might be an overreaction, the email stated that decision was made as “preparation for the inevitable.”

“Fires, mudslides, earthquakes, all this East-Coast-rain-and-wind bullshit. We aren’t even sure what else can physically happen. Seriously, we checked with all the Earth Science majors we could find and they all said that in a couple of months Isla Vista is basically gonna be like that movie 2012, where the world ends, except it’s gonna be in 2018. And with any luck it’s not gonna have John Cusack.”

Although a drastic measure, this sort of physical retreat is not unprecedented for an educational body. In 2009, Khan Academy was forced to close its primary campus in Salt Lake City and move online after the Church of Jesus Christ of Latter-days Saints deemed founder Sal Khan’s presence to be “too sexually virile” for the largely Mormon populus.

As administrators frantically call their relatives that they think might be able to set up a website, a strong movement has emerged among the student body pushing to merge the university’s new online presence with the UCSB Facebook meme page. When approached for comment, a representative of the university expressed legal concerns regarding maintaining the rights to the page when its name is changed every other day.