UCSB Runs Out of Toilet Paper Made from Recycled Finals Emails 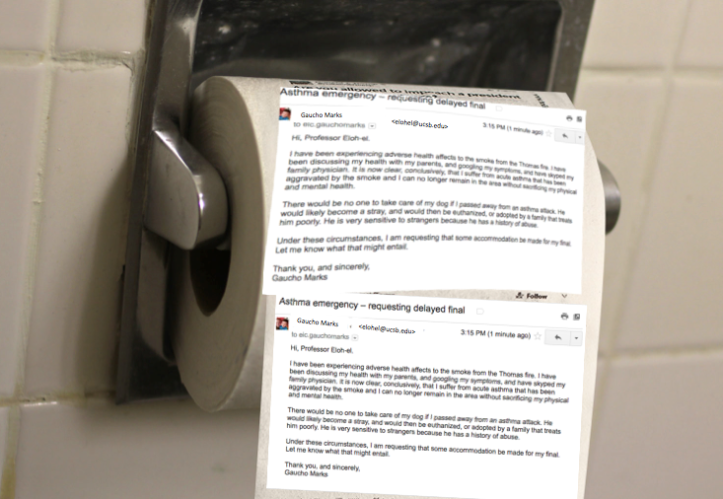 Just in time for finals week, faculty from all departments will need to restock their supply of toilet paper, which is running dangerously low according to a campus-wide memo released by campus administrators Tuesday.

Since December, instead of the usual industrial one-ply, bathrooms across campus have used recycled emails sent by students to professors requesting extensions and exemptions from finals-related responsibilities due to the Thomas Fire.

A miscalculation by the university’s legal team resulted in the large number of hard-copy emails that supplied the raw material for the toilet paper.

“December of last year aged me,” said Chancellor Henry T. Yang, whose once jet-black hair is now sprinkled with gray. “Our attorneys felt it would be a good idea for us to have hard copies of all documents related to special accommodations made due to the Thomas fire. Later, they discovered that the university did not need them. Our ‘Green School’ ranking really took a hit when we printed them all. Did you know that Earth Day started in Santa Barbara in 1970? How far the great have fallen.”

When the dust (see: ash) had settled (see: ceased to fall from the sky), it became clear these printed copies were no longer necessary. For a short while, faculty and administrators were at a loss for what to do with the metric half-ton of “bullshit excuses,” said one Earth Science professor who has asked to remain anonymous.

That’s when their environmental training kicked in. At a campus-wide, super-cool faculty party at Mosher Alumni House, the recently tenured Chemistry professor and resident genius Hannah Wilson had a brilliant idea: reduce, reuse, recycle. The stinky, shit-tier quality of the thousands of excuses also sparked the necessary association: garbage.

Not all professors’ reactions to the Thomas Fire and mudslide emails were negative. “It was actually the some of the most creative and imaginative writing I had read all quarter,” said Herbert Sandowsky, the chair of the Comparative Literature department.