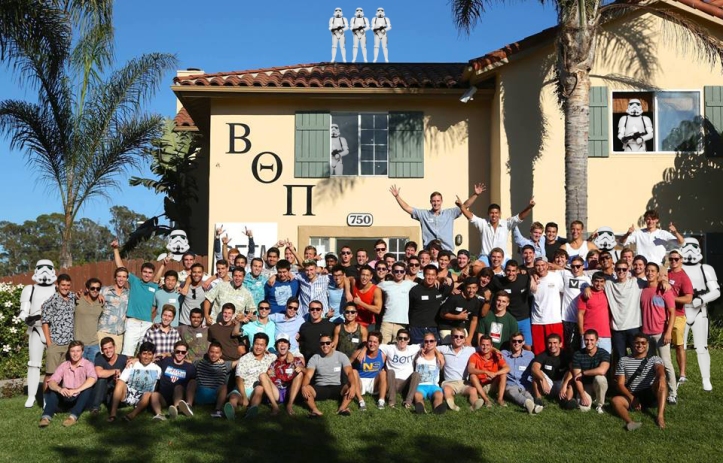 Star Wars, the toy and apparel brand best known for inspiring the film series of the same name, has seen a major resurgence in retail within the past few months thanks to the release of the seventh film in the franchise.

In addition to millions of action figures (the majority of which will never be opened), the massive marketing campaign has also spawned a collegiate branch. This includes bro tanks, shot glasses, and bottle openers. As a result, the number of Star Wars-themed TGs held by the fraternities and sororities of UCSB has skyrocketed.

Speaking at one such occasion, fourth year Biochemistry major and DTD (which is now being referred to as Nu-Sci-Fi) Social Chair Lawrence Brackett explained some of the new traditions that are being forged in the system. “This isn’t just some fad for us– we’re serious about this shit,” he said. “We don’t even want you rushing if you can’t name at least seven alien species represented in the background of the Mos Eisley Cantina scene in A New Hope.”

When asked what effect the new focus would have on the fraternity culture, Brackett responded, “About as much of an effect as Kylo Ren’s Force mind probe had on Rey at Starkiller Base.” For the specificity of the reference, he received an enthusiastic high-five from a passing fraternity brother. “We’re still gonna go fucking hard. There are guys upstairs that are still frozen in carbonite from last night.” (This seems to be a new euphemism for being severely hungover).

“And the sororities are on board, so we’re definitely still pulling,” Brackett added without provocation. “Just the other night, I had this dime ask for a ride on my ‘Millennium Falcon.’ So, of course, I kicked her out of the party. Because, c’mon, it’s basic knowledge that the Falcon has only been owned by Lando Calrissian, Han Solo and Chewbacca, Unkar Plutt, Gannis Ducain, and the Irving Boys, plus or minus a few if you want to go by the Expanded Universe from the death of Chewbacca onwards.”

“Jesus, Chet,” Brackett shot back, “if you haven’t read Vector Prime yet that’s your own fucking fault! Besides, with Disney’s acquisition of Lucasfilm, The New Jedi Order series and the whole previous EU has been reclassified as Star Wars Legends and thus shouldn’t be regarded as canon, bitch.” At this, the other young man walked away with his head hung in shame.

“Doesn’t even know about the death of Chewbacca. What a tool,” said Brackett, taking a swig of his beer. “One thing I can say is that, if that girl had respected proper canon and at least referred to my penis as a nondescript Corellian YT-1300 light freighter, things would’ve been different. But you can’t change the past.”

I then suggested that this is exactly what had been done with the special edition re-releases of the original trilogy, at which point Brackett stormed off and refused to continue with the interview.