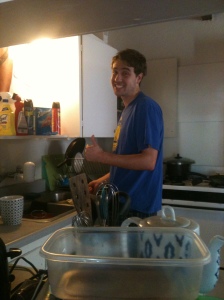 Kelly and roommates Bryanne Charles, Fiona Stone, and Sam Montgomery, share a house on Trigo that has been described by their guests as “repulsive,” “disgusting,” and “like a cross between an opium den and a petri dish.” The girls are comfortable in their home, no matter how fetid and rotten it may be, and wouldn’t change a thing. For several weeks now, however, this agreeable quartet has watched their preferred living situation whipped into a tidy and sanitized environment by Kelly’s boyfriend, Brian Tanner.

“It’s bad enough that I have to hear them fucking at 1 a.m., but I also wake up to find the beer bottles cleared off of the countertop and the floor newly swept. Every time he leaves we have to start trashing the house all over again,” recalls Sam. “Our house is a shithole- is it really too hard to keep it that way?”

After catching Brian wiping down her kitchen counters with 409, Kelly admitted to the first few tendrils of doubt about her new boyfriend. “He’s such a sweetheart,” she told reporters. “I think he just sometimes loses control a little. It might be the way he was brought up.”

According to Bryanne, the first cleaning incident happened at 8:02 pm, on the Wednesday Kelly first brought him to the house for dinner. When finished, Brian reportedly rinsed his plate under the kitchen sink, scrubbed it with a soapy sponge, rinsed it again, dried it with a hand towel, and placed it in one of the dusty cupboards. He proceeded to wash each dish in the sink- some of which, according to Bryanne, had been there since the first day they moved in.

“Look, I’m not asking for him to start buying us food or anything,” said Fiona. “I just want him to lay off the Martha Stewart complex and respect our rancid, dilapidated house.”

According to Fiona, the girls were forced to host a kegger last Wednesday night to eradicate the cleanliness Brian left behind. The next day however, Brian was at it again, quietly going around the house with a trash bag and Windex®. The girls watched, defeated, as he removed all the plastic cups and vomit stains from the living room.

“I was speechless,” said Bryanne. “What do you say to somebody who thinks they can just throw away all of the spoiled food in your refrigerator or untangle the cables behind your T.V. like they own the place?”

The straw that broke the camel’s back apparently fell when Bryanne walked in on Brian replacing a moldy shower curtain. “I just lost it,” said Bryanne. “That putrid shower curtain was a crucial part of our bathroom’s overall aesthetic, and he ruined that.”

Added Bryanne, “It’ll take me weeks to make the new one as scummy and feculent as the last.”

When reached for comment, Brian Tanner told reporters he was “too busy handling the girls’ laundry” to provide an interview. This egregiously rude gesture ultimately cost him his relationship with Kelly, and he is now considering a change to his clean, organized ways.