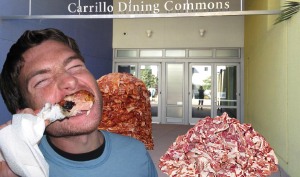 RDS introduced the meat-only day to “give those tree-hugging jerks a taste of their own, bland tasting medicine,” defending their decision by citing the numerous complaints from meat-loving patrons in regards to the dearth of vegan and vegetarian options. Menu items on the first day include: steak, bacon-wrapped steak, beef pilaf, rice-less jambalaya, and an assortment of sandwich meats with no bread. Dozens of students have already voiced their support for “Carnivore Carrillo Day,” including second year and exclusive meat-eater John Kerwahld.

“I usually have meat three to four times a day. I don’t know why, but I just don’t find anything else appetizing,” said Kerwahld while shoving a fistful of gyros into his mouth. “I love my steak basically raw so that I can feel the blood gushing into my mouth when I take a bite. The only sad part about Carnivore Carrillo day to me is that they don’t let us kill our own food before we get to eat it.”

Despite a good amount of support, “Carnivore Carrillo Day” has left much of the student body more riled up than when UCSB changed the library toilet paper from 4-ply to 2-ply. Vegan third-year Jordan LaMarche told reporters, “On Fridays I starve because I cannot eat at Carrillo. I cannot even go there if I’m thirsty because all that they have available are eggnog, meat smoothies, and bacon infused whole fat milk.” When asked why he does not just go to Ortega or De La Guerra on Friday’s LaMarche replied, “Well, I live on the end of the 65 block of Del Playa, and Ortega and De La Guerra are all the way across campus. I don’t eat enough protein to make that trek every Friday.”

Generally, however, the student body has responded with its usual level of profound indifference. “It’s not my lifestyle,” said fourth year vegetarian Blake Kettermore. “I don’t think I’m better than anybody who eats meat, just like I don’t think those ravenous carnivores are better than me.”

“But I’m starting to miss the 4-ply toilet paper in the library bathrooms,” added Kettermore, “because Fridays are really starting to suck.”