Mitt Romney and Paul Ryan, on a recent campaign tour stop at UCSB,
were asked to comment on the newly revamped campus alert system. At
the time, Romney responded that such a system is “useful, as it helps
raise awareness and will stop crime.” Later, the GOP team investigated
the system and issued an augmented campus alert system, what they call
the Romney/Ryan Alert Protocol for Emergencies, that would take effect
in public universities nation wide, should they take office. The
following is the email correspondence that took place between various
Republican senators in creating the RRAPE plan.

Hey Mitt,
Copied below is an excerpted UCSB Alert. I believe that their current
system fails to highlight the seriousness of certain crimes while
exaggerates the importance of others.

“On October 28, 2012, at about
10:30 p.m. a female reported that she was walking on Embarcadero Del
Mar in Isla Vista when a male grabbed her and pulled her into a dark-

colored sedan. She was able to get away from the male and reported the
incident to the Sheriff s Department. The male is described as
Hispanic, about 40 years old with a wide nose.“

This alert fails to emphasize the severe threat that non whites pose
to white society. We propose that any minority-on-white crime be
termed a “Code Black,” which will be our most severe ranking.  You’re
right, we would be better off if the illegals self-deported.
Patiently Awaiting Your Response,
Paul
PS. The tie you wore to our last meeting really made your eyes pop.

Hey Paul,
Exactly! Minorities ARE the problem and students need to learn this as
early as possible. Your color-coded system will achieve this
educational goal easily. As you said earlier, the current system does
make too big a deal out of things that are natural in college life.
For example, the alert (copied below) terms what in my college days I
would have called “a good Friday night,” as sexual assault.

“On October 20, 2012, at about 8:00 PM, a female reported while
walking on at about 6580 Cervantes Rd., Isla Vista, a male grabbed her
and attempted to pull her into nearby bushes. She was able to get away
from the male and reported the incident to the police. The male is
described as a white male, about 20 years old, 6 foot 5 inches tall,
with a buzz style hair cut. He was wearing a black hoodie and dark
pants.”

First of all, what is a woman doing walking alone in Isla Vista at
8:00 pm? She’s obviously asking for trouble. Secondly, what was she
wearing? These alerts should include a description of the woman’s
clothing so we can better know the seriousness of the crime and
categorize it accordingly.

Tell Me What You Think,
Mitt ❤

PS: Thanks about the tie. I listened to your Mixed Playlist CD-ROM.
You’re right, Rage Against the Machine IS underrated. Sorry they
disowned you :(.

PS: Add “Code White,” in which the woman receives a glorious gift from God.

Rick Perry replied:
RRAPE sounds like it’s going well! We should include a classification
for homosexual assault, perhaps “Code Brown,” either right below or
above “Code Black.” Santorum suggested the name. He’s at my place.

Second Email from Rick Perry:
He’s over for a perfectly natural meeting. Also our wives our friends….

Really, don’t worry about it.

Ron Paul replied:
I hate to say it, but I’m against this. It directs too much taxpayer
money to the already over-funded public education system.

Stop CCing me on your idiotic plans. 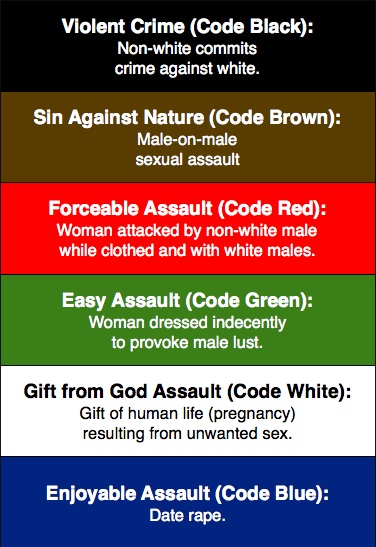