Chancellor Yang has personally stepped in to host a new Associated Students event based on the previous successes of UCSB’s AS (or the lack thereof, it remains unclear which). In conjunction with Subtle Asian Traits and Elon Musk, Yang is utilizing the entirety of AS’s $15 million budget to bring us the ultimate electronic dance music festival. In fact, Oprah herself stated her excitement, but unfortunately was only able to make it to commencement, citing her retirement from the scene as her reason for not coming.

In an interview, Musk stated that he “volunteered for this position as the Technoking of Tesla, and [is] excited to pair up with his longtime friend Chancellor [Daddy] Yang in hosting this massive festival.”

Months ago, Yang addressed students over an impromptu zoom meeting to make a poll amongst the Asian student population of what they would like to see in support of the AAPI community. Based on a unanimous vote, students selected an EDM festival.

Reports state that there were disputes over the naming of the festival. Musk wanted the name Orange Tesla Insomniac Rave-a-thon while Yang thought that the school openly sponsoring a rave would result in a loss of UCSB’s annual funding. To address these rumors, he sent various emails to alumni and parents describing the event as a “friendly, prom-like dance gathering.”

Rumor has it that after sending out these emails, Yang wiped a bead of sweat off his brow, chugged half a red bull, then proceeded to headbang for hours to SLANDER’s “Move Back” and Excision’s “Throwing Elbows.” As a result, he acquired his first noise complaint of the year and was visited by concerned police at the front of his house.

A mass gathering of students on Subtle Asian Traits stepped in, aptly naming the festival Sadboi Vibes Presents: EDC at the Beach. Asian students at UCSB also voted on the lineup and decided to bring in: ILLENIUM, SLANDER, Boombox Cartel, MitiS, Seven Lions, Dabin, Armnhmr, Said the Sky, and Gryffin for an event spanning 5 hours over 2 days. The event is slated to start two days before the graduation ceremony with Oprah, and is specially designed to make students forget their qualms over virtual commencement. The logic behind this is that after raving for two consecutive days, students will be too tired to even want to get out of bed for graduation.

Chancellor Yang at the young age of 80, has decided to retire after this event as well. With nothing to lose, he has decided to let the students engage in full-on hedonistic pleasure, offering free drinks upon demonstration of a fake ID, and will be joining the students in festival activities.

“If you were going to retire after a rave, this would be the one to be at”
–Anonymous Student.

“Truly supportive of the AAPI community, big thanks to all for honoring our heritage!”
–Anonymous Student #2.

“Forget Countdown 2020, forget Ultra Miami, EDC at the Beach is the show to beat!”
–Edm.com 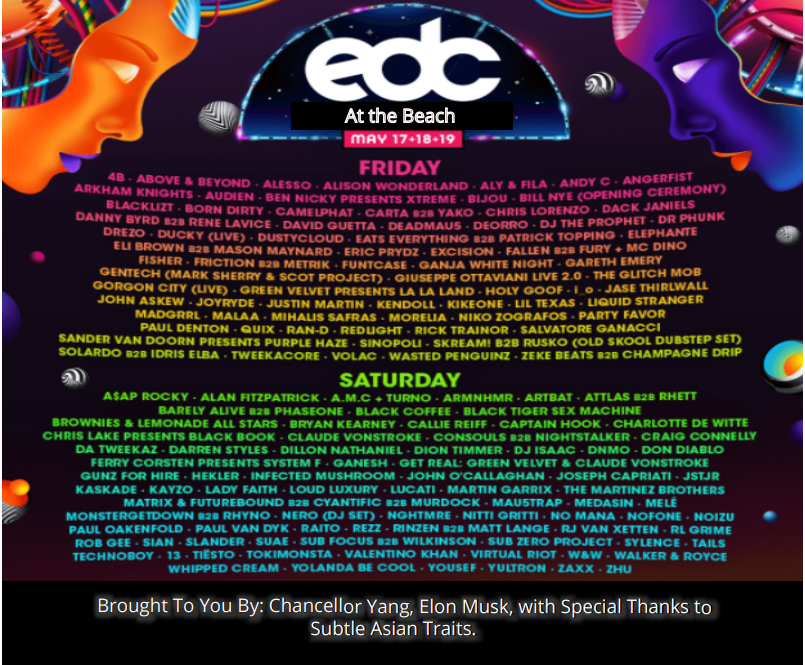